An Overview of Options and Opportunities (O³) for National Development

Implementing an integrated strategy that will be a catalyst for National Unity and Good Governance that will motivate current and future generations towards creation of a national system of governance, values and ethics conductive to sustained “green” economic development and socio-cultural harmony.

Guyana is a small global player given its GDP of about US$2.6B, which is considered a micro market in the context of global GDP. It has a very small population of about 0.75 million persons and per capita GDP of approximately US$3,500, which is one-half of the global average and the second lowest in Caricom. But it has all the assets – English speaking, the geo-strategic location, natural resources and market access, to become a significant regional player which can leverage its BRICS access into a modern prosperous State.

Guyana is a bridge to CARICOM countries and the vast continent of South America where its neighbor Brazil has a population of more than 200 million. With Brazil being a central member of BRICS, Guyana, through a strategic approach to its development can become the “Singapore “ of this region as well as have markets in China, India, Russia and Africa, using new financial instruments created by BRICS for South-South trade.

Moreso, Guyana has huge agricultural assets (over 200 fruits and vegetables), gold, diamonds, manganese, sand, stone and forestry products that could be a platform for rapid and significant growth while using its low carbon growth framework to transition it to a “green” economy over the next 25 years.

Guyana also has the potential to create water-based industries due to its huge water assets and to obtain wealth from oil, once found. All of these endowments become more viable and sustainable if Guyana is able to partner with Brazil, through a road/railway/fiber optic infrastructural agreement that makes Guyana a transshipment hub with a Deep Water Harbor, Free Enterprise Zone, an enlarged airport, two modern bridges across the Demerara River and the implementation of planned infrastructure such as the DelConte Road, the Sheriff Street Highway and the Corentyne Bridge.

Guyana’s greatest wealth lies in its People and its agricultural diversity (as well as landmass). CARICOM countries import over US$4 Billion annually in food. Guyana already knows, from 20 plus plans, the enabling strategic infrastructure and choices (energy sources etc.) to become not only the breadbasket of the Caribbean but to position itself to be one of the significant global “food security” players.

Food and water are both scarce globally and this will become worse as the current 7.1 Billion people will grow to 9 Billion by 2050. Climate change with its associated problems of intense hurricanes in the Caribbean, rising sea levels, the destruction of coral reefs and other natural sea defenses, flooding and weather related uncertainties, will make Guyana a desired destination for both food and refuge.

Preparing ourselves to meet the global shortages of food and water and to reintegrate the vast amount of skills, capital, technology and networks of the Guyanese Diaspora is very possible if steps are taken now to plan and implement a visionary economic strategy underpinned by an integrated infrastructure framework that is both hardware and software (education system, healthcare etc.). This infrastructure will release the creative energies of our Peoples at home and in the Diaspora and can create over 100,000 jobs for our Youth and workforce over a 5 year period.

These jobs will also have wide geographic distribution in Berbice, Essequibo and Demerara. Industries already present will be enhanced by the infrastructure implemented as their cost structures will benefit in a significant way. Additionally, new industries can be strategically developed to meet local job and population requirements.

In short, Guyana’s economic prosperity is achievable because of its natural endowments. All of this is for naught if the political framework is not put in place. There is access to over 320 million customers with a purchasing power of US$3 Trillion and an export market off US$409 Billion.

Guyana has slowly over the years recognized some of the critical infrastructure it needs. The Berbice Bridge, the Takutu Bridge, a new bridge over the Demerara River etc. These are part of the integrated transformational backbone that will allow Guyana to meet its global and continental destinies. Some have been built; others are in the process of being built while others are stacked away in plans such as the National Development Strategy, the Guyana 21 Plan and the German study of 2003 etc.

Five critical elements are necessary for Guyana to bloom and for the political architects of the plan to transform Guyana over the next 20 years, in an uninterrupted period of envied growth. 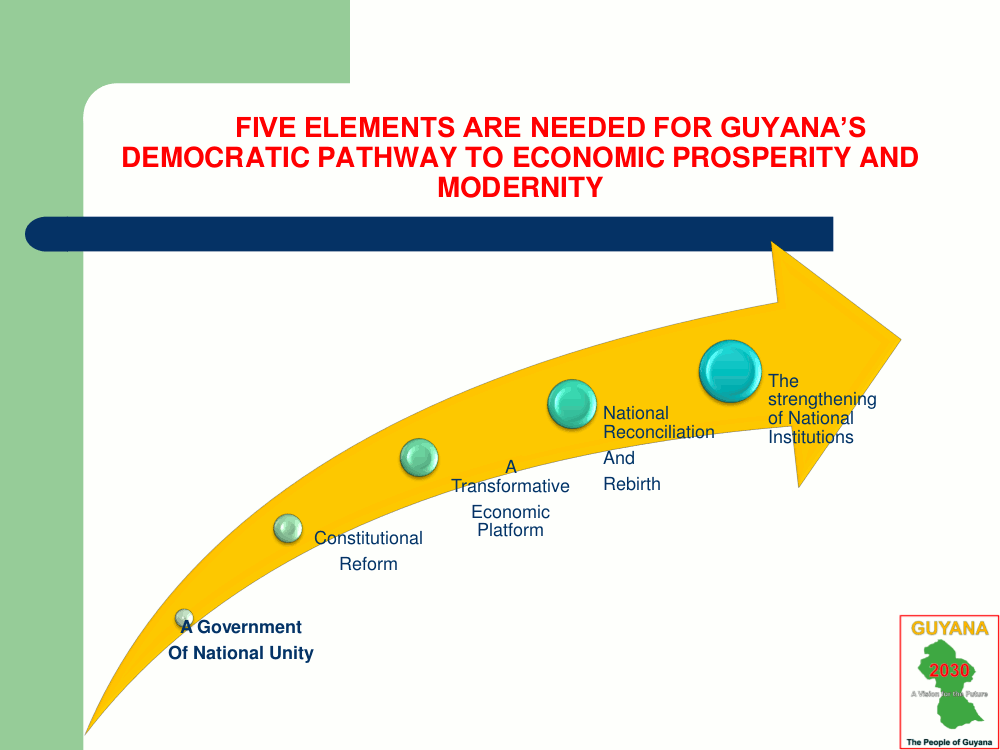 The first is a Government of National Unity which would ultimately bring racial peace and national reconciliation if the appropriate mechanisms are put in place.

Second, Constitutional Reform to make governance more inclusive would not only make Guyana a modern State but would underpin the necessity for good, just inclusive governance.

Third, a transformative Economic plan is absolutely necessary if prosperity is to be shared by all. The current constitutional arrangements are not People oriented and are very exclusive (Winner-take-all). The “old” economic sectors (sugar, rice, bauxite, fossil fuel) would be re-vitalised and the “new” economic sectors positioned to be globally competitive with secure markets and sustainable job creation.

Fourth, there needs to be a specific effort to nurture national reconciliation and the rebirth of nationalism.

Fifth, underpinning all of the above would be the strengthening of National institutions (UG, legal, human rights, financial etc.)

Guyana is at a crossroads as we enter 50 years of Independence. Political will and visionary actions are needed. The first of these has been the formation of a coalition leading to a Government of National Unity. The next action is to share a transformative economic vision with the Nation. Sector specific plans need to be shared with the electorate underpinned by “how does it benefit me…..the ordinary citizen of Guyana?”

The time to act is NOW.

The immediate objective is to find a way to move the country forward having consulted as widely as possible with the people of the country.

Revitalization of the Urban Land Spaces and Traffic Flow around the City’s Largest Market.

Parika’s growth as a Major Secondary Settlement based upon orderly planned development.

Improving Lethem for a wider range of Administrative and Service Oriented functions.

PDFs may take some time to transfer.

We welcome all support and feedback so why not drop us an email!